The Medieval Studies Forum have arranged a special lecture by Professor Alexandra Sanmark (University of the Highlands and Islands) on 'Medieval Sites of Power and Assembly in the Thames Valley', which includes a look in detail at the sites of both Kingston and Runnymede.

After Prof Sanmark's lecture, the National Trust team will provide a short presentation and update on the Runnymede Explored project.

This talk will be held online, via Zoom.

Although welcome to all, the event is free for SyAS and MSF members, with a fee of £2 from non-members.

Although early medieval studies have the advantage of documentary evidence – particularly from the 6th century onwards – the historical accounts are often rife with bias and must be treated with caution. Saxon and Viking studies are also complicated by issues of ethnicity and religion, and it clear that rather than notions of mass migration or simple ‘Christianisation’ of pagan practices, identities formed through a variety of processes.

This year's annual Surrey Historic Environment Research Framework will be held jointly with the Council for British Archaeology South-East annual conference and themed around the subject of church archaeology. The event will be a one-day virtual conference held online, via Zoom video conferencing.

Evaluation by O Rouard of TVAS revealed some dispersed undated linear features and a very sparse assemblage of Saxon and medieval pottery.

Strip, map and record excavation and watching brief by S Westall of AOC revealed a layer of loose, light brown sand, 0.13–0.24m thick, containing a large quantity of worked Mesolithic flints; none were in situ, having been deposited through colluvial or fluvial activity. Two ditches of Roman or possibly medieval date and a Saxon pit were also recorded.

A magnetometry and earth resistance survey by R and S Ainslie of Abingdon Archaeological Geophysics within the boundary of the Scheduled Monument revealed three anomalies of possible archaeological origin. A subsequent test pit evaluation by W Weller of SCAU revealed a segment of a possible early medieval ditch towards the north of the site and confirmed that some areas to the south of the site had been truncated by recent quarrying.
Archaeological monitoring of soil stripping by L Lewins of TVAS revealed seven graves containing the remains of at least ten individuals. A minimum of two phases of burial were identified, characterised by those displaying an expected burial form for furnished early medieval burials, and later non-normative graves. Recovered artefacts and radiocarbon dating indicates that this part of the Guildown cemetery was in use over an extended period of time spanning the 6th to 11th centuries AD. The majority of skeletons were buried in supine and extended positions. 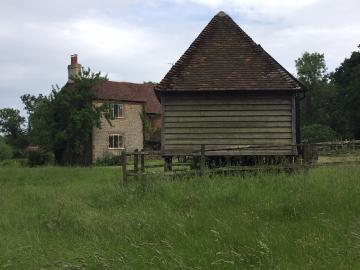 This guide is a collection of links to online resources useful for the study of medieval landscapes in the historic county of Surrey, put together by Rob Briggs, Historic Environment Record Officer for Surrey County Council. It acts as a follow-up to a Surrey Archaeological Society study day about the medieval landscape in March 2020, with a focus not on medieval towns and villages but on the surrounding manors, farms, fields and other rural institutions.