Folklore of Surrey by Matthew Alexander 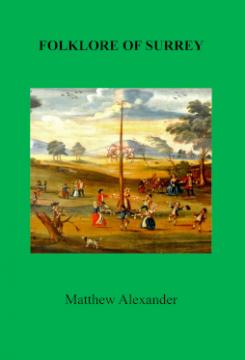 Until now Surrey has lacked any study of its local folklore, a serious omission because county surveys like this form the first stage of comparative folklore and social history, and are almost ubiquitous in England. They have played an important part in local identity even when historically they were of variable quality. We are lucky that, having waited so long, we have got one which is good.

Folklore of Surrey is framed around ‘Old Surrey’, the working-class traditions of village and market towns in the long 19th century, although additional material takes the story down to living culture for popular themes such as ghosts and childlore. Some traditions rely on a single record, but several have multiple records over time and it is a strength of this book that it traces evolution and development in a subject which has often been treated as static. The growth of legends like Mother Ludlam’s Cave and popular customs like Christmas visiting is well handled. Matthew knows what he is writing about as both actor in and chronicler of popular custom.

All the folklore is referenced to primary sources and it is made clear when there has been feedback from literary inventions such as the Silent Pool and Blanche Heriot of Chertsey. The judgements on earlier collectors like Edward Lovett or Charles Kerry of Puttenham are illuminating. What might seem undifferentiated ‘tradition’ is teased out into the lore of specific micro-communities: crafts, age groups, competitive village communities.

For Surrey researchers, the book is rich in material that will feed into broader debates about local history, especially those occasions when tradition was made the flash-point for conflict, as in the Guildford Guy Riots. The imposition of Victorian civility on popular proletarian resistance is a running theme from areas such as street football to wife-swapping. Folklore was a force for both cohesion and exclusion as is made clear in such topics as legendary village origins and witchcraft.

Folklore of Surrey is accurate, comprehensive and relevant as well as a fascinating book to read.

Available from the Society’s headquarters at Abinger or by post (Hackhurst Lane, Abinger Hammer RH5 6SE); please make cheques payable to ‘Surrey Archaeological Society’. Copies are also available from Guildford Museum and Surrey History Centre and will be available from Bourne Hall Museum when the shop reopens.

A Guide to Roman Pottery from Selected Sites in Surrey 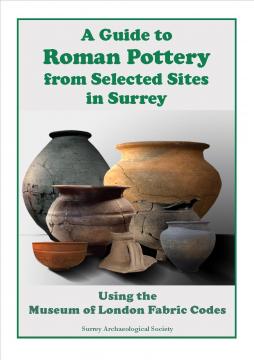 The Guide to Roman Pottery in Selected Sites in Surrey is a quick guide that uses the Museum of London Fabric Codes. The codes were used for recording Roman pottery from excavations in Ashtead, Abinger, Seale and Farnham. The Guide has a clear description of the pottery fabric and the typical forms for each fabric. Images at high magnification show the fabric of the many types of pottery found in Surrey and provide dating details for the different fabrics. Other images show decoration techniques frequently used on the surface of Roman pottery. The Guide should be used in conjunction with the physical type series held by the Museum of London.

Size A5 with a laminated cover, 52 pages with 73 photographs and 5 tables and illustrations.

A Guide to Saxon and Medieval Type Series of  Surrey 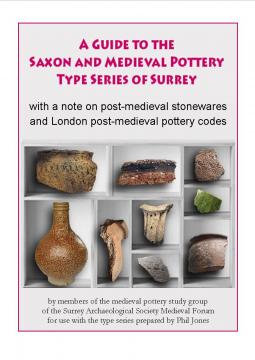 The Guide to the Saxon and Medieval Pottery Type Series of Surrey is a quick guide based on Phil Jones’s Medieval pottery type series. He developed this type series over many years of studying Medieval pottery found in Surrey. The Guide has a clear description of the pottery fabric and the typical forms for each fabric. Images at high magnification show the fabric of the many types of pottery found in Surrey. Other images show typical sherds.

The Guide should be used in conjunction with the physical type series held at the Abinger Research Centre. Please contact the Library for more information.

Size A5 with a laminated cover, 40 pages with 67 photographs and 8 tables and illustrations.

GREAT BOOKHAM: The Development of a Surrey Village in Maps 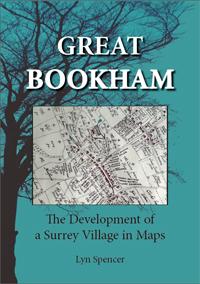 This book is another in the Society's Villages Study Project and examines the development of Great Bookham up to the early 19th century. The village is one of many settlements on the dip-slope of the North Downs. Maps are used to illustrate the growth of the village together with an examination of the factors that influenced its development over the centuries. Researched and prepared by Lyn Spencer.

Price: £10.00 (add £2.60 p+p).  This book is currently available from the author and Leatherhead & District Local History Society.   Enquiries sent to Surrey Archaeological Society will be forwarded.

ESHER: Origins and Development of a Surrey Village in Maps 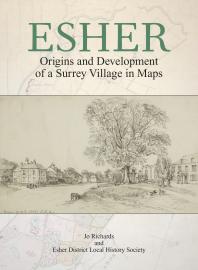 This volume in the Society’s Villages Study Project offers a comprehensive assessment of Esher’s development from pre-history to the mid-19th century.  Settlement growth and land-use change across the whole parish is illustrated by a series of newly created place-name maps together with reproductions of original maps and plans. Researched and prepared by Jo Richards aided by the research group of Esher District Local History Society.
Size A4, 66 pages of which 25 in colour, 30 maps plus 17 tables and illustrations

Price: £10.00 (add £3.00 p+p).  This book is currently available from the author and Esher District Local History Society.   Enquiries sent to Surrey Archaeological Society will be forwarded.

Aspects of Archaeology and History in Surrey: towards a research framework for the county

This volume has been published to coincide with the 150th anniversary of the Society. It gathers together a number of papers presented at a conference held in June 2001. Topics covered include:

Ewell: a Surrey Village that Became a Town

This, the third publication resulting from the Society's Villages Project, records the growth and development of the village of Ewell in north-east Surrey. The information is presented through a series of maps from the medieval period through to the 19th century. This booklet is the result of research carried out by Charles Abdy assisted by members of Epsom & Ewell History & Archaeology Society.

Thorpe: a Surrey Village in Maps

This, the second publication resulting from the Society's Villages Project, records the growth and development of the village of Thorpe in north-west Surrey. The information is presented through a series of maps from the medieval period through to the 19th century. This booklet is the result of research carried out by members of the Egham-by-Runnymede Historical Society.

Shere: a Surrey Village in Maps

A fascinating new study of the village and its buildings through a series of maps of the village from the medieval period onwards. This is the first publication resulting from the Society's Villages Study Project and similar reports on other villages will follow in due course. This booklet is the result of research carried out by members of the Shere, Gomshall and Peaslake Local History Society.


The Royal Castle and Palace at Guildford by Rob Poulton

This popular booklet presents in a very readable way the results of a four-year training and research excavation by the Society, which was highly successful in rediscovering the site of the lost palace and the layout of many of its buildings. Full colour illustrations include photographs of the excavation, standing buildings, maps, plans and reconstruction drawings. The booklet offers useful resource material for local history studies and for Key Stage 3 study of medieval realms.

Size A4; 16 pages with many illustrations.