Although early medieval studies have the advantage of documentary evidence – particularly from the 6th century onwards – the historical accounts are often rife with bias and must be treated with caution. Saxon and Viking studies are also complicated by issues of ethnicity and religion, and it clear that rather than notions of mass migration or simple ‘Christianisation’ of pagan practices, identities formed through a variety of processes.

Hurst Park, East Molesey cAD 550, (Early Saxon)
The excavations uncovered a total of eight hollows that would have formed the principal below ground element of what are called sunken-featured buildings, these being the smaller buildings shown here. It seems probable that the shallower evidence for the larger post-built structures that are most prominent in the image was lost through truncation before archaeological work began. The viewpoint looks approximately north. (Drawing by Giles Pattison © Surrey County Archaeological Unit)

With the development of more scientific techniques every day, further  advances are able to be made in local fieldwork. At Old Woking, radio-carbon dates from an assemblage of animal bones – mainly pig – recovered in test pitting  provided dates of AD 663-721 and irrefutable Saxon presence in the settlement. Minor excavations at Guildown cemetery by TVAS (Thames Valley Archaeological Services) undertook strontium and oxygen isotopic analysis of teeth from three ‘deviant’ (atypical) burials (cover image © TVAS), revealing them to be local to Cornwall, rather than the Guildford area. 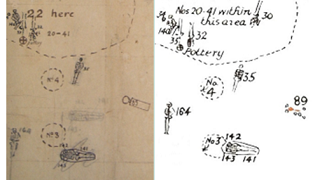 Discoveries do not always rely on new excavations, and – in addition to advances made in place-name studies –re-assessment of select material has produced revelations on such aspects as the dating or provenance of  assemblages. Descriptions in a Coroner’s Report from 1951 of an isolated burial at Compton were recently reconsidered for its suggestively Saxon features, while examination of the records from the Guildown site – first published by AWG Lowther in 1931 – have drawn-out discrepancies in various details.

There are many resources on the Saxon period in Surrey, including the period-specific pages on Exploring Surrey's Past and relevant sections in the Surrey Archaeological Research Framework. The Historic Environment Record (her@surreycc.gov.uk) is also the leading source of heritage information in the county, and has put together the monuments map for the Palaeolithic period below (based on current HER data). In addition, chapters in the South East Research Framework provide useful overviews of the region, including Surrey, as well as a wealth of additional sources. 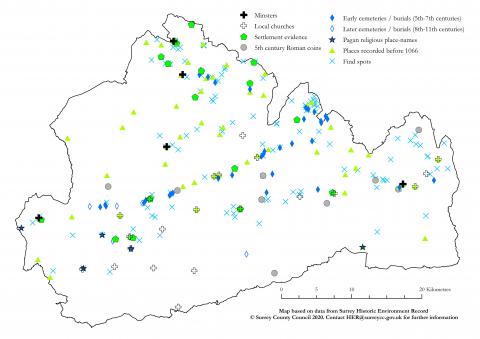 A downloadable A3 size leaflet on Saxon Surrey has been put together by the Society in the hopes of providing a helpful overview and timeline of the period, illustrated with select images from excavations, research and fieldwork.

For some further learning sources on Saxon Surrey: