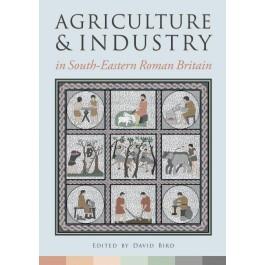 Edited by David Bird (our President).

This recent Oxbow publication arises out of some recent Society conferences.  Full details can be found HERE

The ancient counties surrounding the Weald in the SE corner of England have a strongly marked character of their own that has survived remarkably well in the face of ever-increasing population pressure. The area is, however, comparatively neglected in discussion of Roman Britain, where it is often subsumed into a generalised treatment of the ‘civilian’ part of Britannia that is based largely on other parts of the country. This book aims to redress the balance.

The focus is particularly on Kent, Surrey and Sussex account is taken of information from neighbouring counties, particularly when the difficult subsoils affect the availability of evidence. An overview of the environment and a consideration of themes relevant to the South-East as a whole accompany 14 papers covering the topics of rural settlement in each county, crops, querns and millstones, animal exploitation, salt production, leatherworking, the working of bone and similar materials, the production of iron and iron objects, non-ferrous metalworking, pottery production and the supply of tile to Roman London. Agriculture and industry provides an up-to-date assessment of our knowledge of the southern hinterland of Roman London and an area that was particularly open to influences from the Continent.

Michael Fulford and Martyn Allen:  Introduction: population and the dynamics of change in Roman south-eastern England

David Bird: The countryside of the South-East in the Roman period

Mark Maltby: The exploitation of animals and their contribution to urban food supply in Roman southern England

Jackie Keily and Quita Mould:  Leatherworking in south-eastern Britain in the Roman period

Jeremy Hodgkinson:  The development of iron production in the Roman Weald

Ian Scott: Ironwork and its production

Louise Rayner: Clay, water, fuel: an overview of pottery production in and around early Roman London

Ian Betts: The supply of tile to Roman London