The vast period of the ‘Stone Age’ is often broadly generalised in terms of the key developments which took place, though many concepts have since evolved over the years. The Meso- (‘Middle’) era is one which is most commonly characterised as the period of nomadic groups living off of what they could hunt or gather seasonally, during a period which shifted to covered woodland as a result of rising sea levels and climatic warming.

North Park Farm, Bletchingley, c4500 BC (Late Mesolithic)
The site was identified from the recovery of characteristic flintwork in a sand quarry and the evidence indicates that it was visited repeatedly over several millennia, but most regularly during the Late Mesolithic. It lies on slightly elevated ground at the watershed of major rivers and migrating herds of deer are likely to have been an important factor in is usage. The viewpoint looks approximately north across the open grassland or heath of the Lower Greensand to the wooded North Downs. (Drawing by Giles Pattison © Surrey County Archaeological Unit)

As scientific techniques develop over the years, new advances are able to be applied towards the study of the Mesolithic, even when not directly archaeological sciences. One such example is the role that geomorphology (or landform studies) and pedology (soil science) can play in informing prehistoric environments. In the case of the Late Mesolithic, southern England is known from pollen data to have been mixed deciduous woodland where tree types varied with different soils, as seen in the diagram to the left. 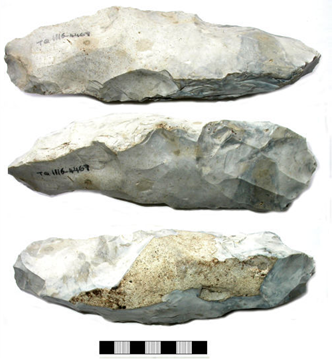 Although not found in context, flints identified through fieldwalking and surface collection can indicate areas of activity and supplement the better stratified evidence uncovered in excavations. When found in situ in features such as pits, flint assemblages can even be dated if charcoal or botanical remains such as charred hazelnuts are radiocarbon-dated, and occasionally use-wear analysis is carried out on the lithics, closely examining the edges and working surfaces to determine their original function.

There are many resources on the Mesolithic period in Surrey, including the period-specific pages on Exploring Surrey's Past and relevant sections in the Surrey Archaeological Research Framework. The Historic Environment Record (her@surreycc.gov.uk) is also the leading source of heritage information in the county, and has put together the monuments map for the Mesolithic period below (based on current HER data). In addition, chapters in the South East Research Framework provide useful overviews of the region, including Surrey, as well as a wealth of additional sources. 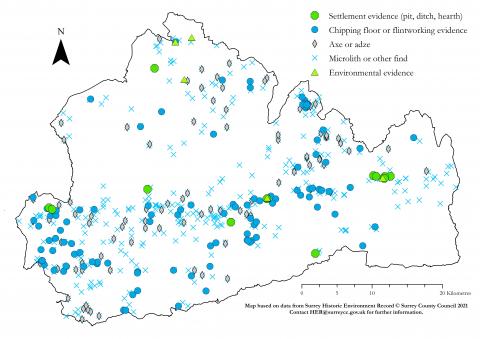 A downloadable A3 size leaflet on Mesolithic Surrey has been put together by the Society in the hopes of providing a helpful overview and timeline of the period, illustrated with select images from excavations, research and fieldwork.

For some further learning sources on Mesolithic Surrey: