Though the study of late prehistory in Britain has commonly focused on the introduction of metallurgy, many important developments also took place, including changes in the agricultural landscape and technological advances. Just as the transition from the Late Bronze Age is often an unclear boundary, many aspects of Late Iron Age culture also remained largely unchanged into the Roman period, particularly in the countryside.

Tongham Nurseries c100 BC (Late Iron Age)
Evidence for all the buildings shown was found in the form of wall trenches, postholes and eaves-drip trenches. The buildings in the foreground were separately enclosed and might be the residence of a chief with the dwellings of his followers behind. The site is one of a group of this period established on level ground created next to the river Blackwater before that was reduced to a stream  when its headwaters were captured by the river Wey some 500,000 years ago. The viewpoint looks approximately south-west, with the Blackwater on the east side. (Drawing by Giles Pattison © Surrey County Archaeological Unit)

As more scientific techniques and advances are developed every day, local research can lead to new discoveries, without a single spade going into the ground. The application of LiDAR (Light Detection and Ranging) is a case in point, which uses lasers to create a topographic model of the landscape, allowing not only clarity of well-known earthworks – as at Hillbury, Puttenham – but more faint features, such as the adjacent field systems, to be detected. 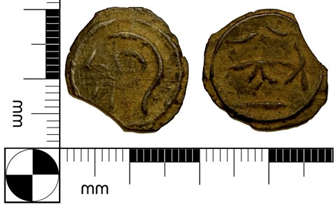 Even more traditional studies such as numismatics – the study of currency – can provide insight into other aspects of society, when not looked at in isolation. In addition to being useful dating tools when found in context, coins such as the Late Iron Age potins can tell much about tribal identity and settlement activity, making  recording on databases such as the Portable Antiquities Scheme integral to distribution studies.

There are many resources on the Iron Age in Surrey, including the period-specific pages on Exploring Surrey's Past and relevant sections in the Surrey Archaeological Research Framework. The Historic Environment Record (her@surreycc.gov.uk) is also the leading source of heritage information in the county, and has put together the monuments map for the Iron Age below (based on current HER data). In addition, chapters in the South East Research Framework provide useful overviews of the region, including Surrey, as well as a wealth of additional sources. 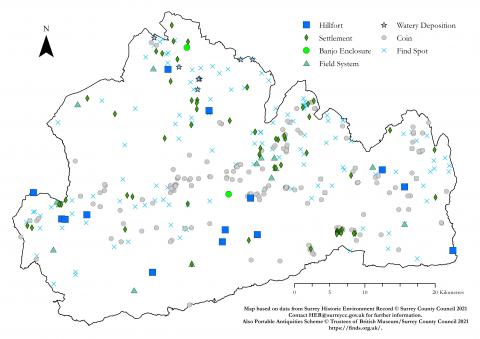 A downloadable A3 size leaflet on Iron Age Surrey has been put together by the Society in the hopes of providing a helpful overview and timeline of the period, illustrated with select images from excavations, research and fieldwork.

For some further learning sources on Iron Age Surrey: