Although the ‘New Stone Age’ is traditionally seen as the period when farming was introduced to Britain, the vast timeframe of early prehistory can make it easy to generalise on the many – often complex – developments which took place. Rather than too much focus on ‘settling down’ however, emphasis has shifted to the real change being a new world view comprising notions of time, descent, origin, ancestry, community, nature, etc.

Ashford Prison/Hengrove Farm, Staines, c3500 BC (Early Neolithic)
The principal building was identified from a series of postholes and stakeholes, but the other structures are conjectural, reflecting the wider distribution of pottery and flintwork from the excavation of almost 20Ha on these sites. The rectangular building is the only one of this period known from the Surrey area, and they are very rare nationally. Their exact purpose is uncertain. Agriculture was not yet based around permanent farms and fields, and it is possible that the landscape of this Thames terrace was less open than the image suggests. The viewpoint looks approximately west. (Drawing by Giles Pattison © Surrey County Archaeological Unit)

With more scientific advances being developed every day, special techniques can be applied to local research, leading to new insights and discoveries. One such technique is organic residue analysis, in which lipids – fats, waxes and resins – that survive in the porous walls of ceramics can give an indication of the use of the vessels and animal products consumed. At Betchworth, a small number of Grooved Ware pot sherds (left) were assessed, suggesting they contained dairy products. 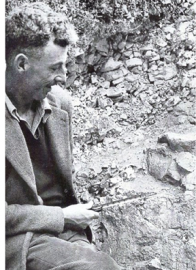 Sometimes the interpretation of sites changes over time, after evidence is re-examined. The supposed Neolithic flint mines at East Horsley, excavated in 1949 (right), are a case in point, as despite tools and pottery of this period – indicating surface extraction – the shafts were determined to be medieval, as the steps cut into the chalk matched those of a metal pick.

There are many resources on the Neolithic period in Surrey, including the period-specific pages on Exploring Surrey's Past and relevant sections in the Surrey Archaeological Research Framework. The Historic Environment Record (her@surreycc.gov.uk) is also the leading source of heritage information in the county, and has put together the monuments map for the Neolithic period below (based on current HER data). In addition, chapters in the South East Research Framework provide useful overviews of the region, including Surrey, as well as a wealth of additional sources. 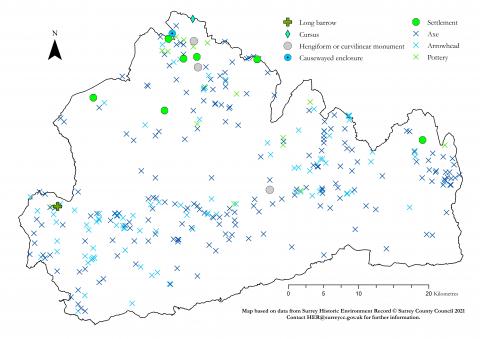 A downloadable A3 size leaflet on Neolithic Surrey has been put together by the Society in the hopes of providing a helpful overview and timeline of the period, illustrated with select images from excavations, research and fieldwork.

For some further learning sources on Neolithic Surrey: