Medieval archaeology developed comparatively late as a discipline, with antiquarian focus largely on the artworks and architectural ruins. As a period which saw an increasing amount of valuable historical sources however,   material evidence can be evaluated alongside documentary, placename and landscape studies, whether in traditional areas – e.g. castles – or new topics of research, such as production, exchange and gender studies.

Guildford Castle and Royal Palace cAD 1250
The buildings in the foreground belong to the royal palace that flourished from around 1150 to 1400. The walls of some (notably part of the king’s chambers on the left) still survive, while others (such as the great hall, whose gable end is shown) are known only from foundations. In the background (right) is the motte, surmounted by the 12th century stone keep, where the castle was first established soon after the Norman conquest. The palace lay on the slope of the North Downs and was arranged on different levels. (Drawing by Giles Pattison © Surrey County Archaeological Unit)

As more scientific techniques are being developed every day, even items such as pottery, which have long been a focus of artefactual studies, can inform on their provenance and technology behind their production. High magnification of fabric and its inclusions has led to identification of a county type series, while ICP mass spectrometry allows detailed chemical analysis and compositional data for ceramic from specific kiln sites, such as Kingston. 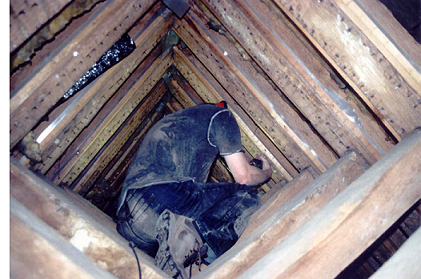 Archaeological science has also been used on timber-built domestic buildings to assess and date their fabric through dendrochronology – study of tree ring growth – which has been able to date key features and help form a chronology for certain styles and patterns.

There are many resources on the Medieval period in Surrey, including the period-specific pages on Exploring Surrey's Past and relevant sections in the Surrey Archaeological Research Framework. The Historic Environment Record (her@surreycc.gov.uk) is also the leading source of heritage information in the county, and has put together the monuments map for the Mesolithic period below (based on current HER data). In addition, chapters in the South East Research Framework provide useful overviews of the region, including Surrey, as well as a wealth of additional sources. 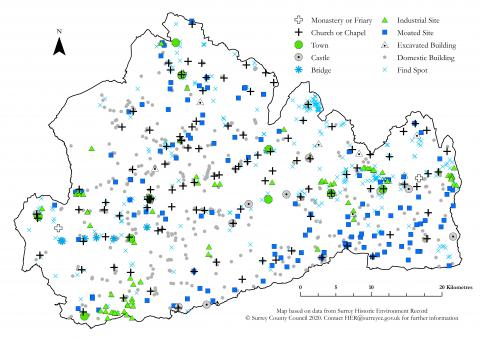 A downloadable A3 size leaflet on Medieval Surrey has been put together by the Society in the hopes of providing a helpful overview and timeline of the period, illustrated with select images from excavations, research and fieldwork.

For some further learning sources on Medieval Surrey:

Bird, J and D G Bird (1987) The Archaeology of Surrey to 1540
Blatch, M (1997) The Churches of Surrey
Cotton, J et al (2004) Aspects of Archaeology and History in Surrey
Hunt, R (2002) Hidden Depths: an Archaeological Exploration of Surrey’s Past
Poulton, R (2005) A medieval royal complex at Guildford: excavations at the palace and castle, SAS Res Vol
Surrey Archaeological Society (2015) A Guide to the Saxon and Medieval Pottery Type Series of Surrey