Study of the Romans has always been a popular period in British archaeology, although research in more recent years has shifted emphasis away from military expansion to themes of change and continuation – e.g. transitions from the Iron Age and to the Saxon era – as well as the everyday life of ordinary citizens in the countryside.

Ashtead Roman Villa cAD 150 (Roman)
The Roman villa was discovered on what is now Ashtead Common and is closely associated both with a sophisticated bathhouse and with a major site for the production of ceramic tiles that were widely used on other high status sites. The building was much altered over its lifetime and it is not always certain which parts are contemporary. The site lies on the London Clay and drainage was evidently a persistent problem. The viewpoint looks approximately north-west. (Drawing by Giles Pattison © Surrey County Archaeological Unit)

With more scientific advances being developed every day, new techniques are able to be applied to Roman studies, including within the county. At Ashtead villa, samples of fired clay tile had archaeomagnetic dating applied to them in 2010 by a team from MOLA (Museum of London Archaeology), showing the tile kiln’s last firing to be AD 205-225. Miniature ceramic pots from the early Roman site at Frensham (left), excavated in 2000, underwent high-resolution geochemical analysis of their contents – revealing traces of cannabis, oil and beeswax – which support interpretation for ritual activity. 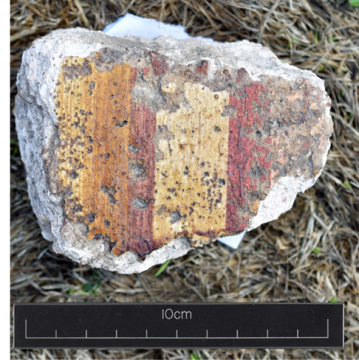 As many sites were relatively early excavations, they are comparatively limited in the resources available at the time. However, re-assessment of some assemblages can prove useful and help to clarify discrepancies in their dating or provenance. A mixed assemblage of fragments of painted plaster, for instance, from the two villa sites excavated by A.W.G. Lowther – Ashtead from 1924-9 and Six Bells in 1946-7 – have recently been able to be allocated to their respective sites through careful analysis of their decorative schemes and mortar backing.

There are many resources on the Roman period in Surrey, including the period-specific pages on Exploring Surrey's Past and relevant sections in the Surrey Archaeological Research Framework. The Historic Environment Record (her@surreycc.gov.uk) is also the leading source of heritage information in the county, and has put together the monuments map for the Palaeolithic period below (based on current HER data). In addition, chapters in the South East Research Framework provide useful overviews of the region, including Surrey, as well as a wealth of additional sources. 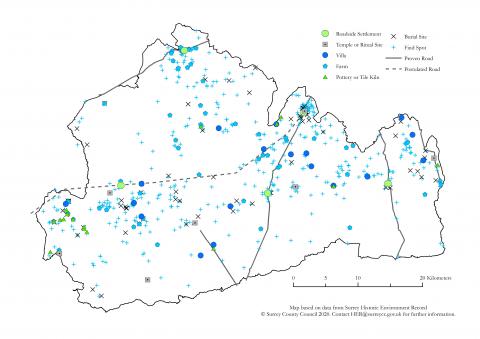 A downloadable A3 size leaflet on Roman Surrey has been put together by the Society in the hopes of providing a helpful overview and timeline of the period, illustrated with select images from excavations, research and fieldwork.

For some further learning sources on Roman Surrey: