Post-medieval – or historical – archaeology is a discipline which has often been overlooked compared to earlier eras, but it is a study of profound cultural, technological and religious change. Many significant events occurred in this 500 year period – both within Britain and on a global scale – from the impact of the Dissolution, to the birth of the Industrial Revolution, and culminating in the devastating conflict seen during both world wars.

Witley Military Camp c.1916-19
The military camp at Witley was created as part of the huge mobilisation of troops for the First World War. The camp was constructed on open sandy heathland, much of which has now been engulfed by trees and scrub. No structures survive but their appearance and arrangement is well recorded by surviving documents, plans and photographs. This artists impression is of the eastern part of camp looking north towards the rising ground north of the Portsmouth Road. The buildings on the left are almost certainly the baths, a boiler-room and a disinfector room, whilst the large building in the middle distance is probably a forage barn or a gun shed. (Drawing by Giles Pattison © Surrey County Archaeological Unit)

With more scientific techniques being developed every day, new advances are able to be applied towards archaeological research, including in post-medieval studies. One such contribution is geophysical survey, a method which can  detect sub-surface features whose properties notably contrast with their surroundings. This includes magnetometry, which maps patterns of magnetism, and electrical resistance, which passes an electric current between probes to assess patterns of varying moisture content. Though magnetometry is particularly useful on buried features such as pits and ditches which often contain burnt material, it can also – with the right geology – detect concentrations of pottery and tile, whose magnetic properties changed when the clay was fired.

A major advantage of post-medieval archaeology is the addition of written records and archives to supplement research, such as tithe apportionments, historical censuses, wills and probate records, and even oral accounts. Military service records can also give considerable insight into both the history of sites and individual objects, as seen in the spoon from Witley Camp, whose service number was able to identify its original owner.

There are many resources on the Post-Medieval period in Surrey, including the period-specific pages on Exploring Surrey's Past and relevant sections in the Surrey Archaeological Research Framework. The Historic Environment Record (her@surreycc.gov.uk) is also the leading source of heritage information in the county, and has put together the monuments map for the Mesolithic period below (based on current HER data). In addition, chapters in the South East Research Framework provide useful overviews of the region, including Surrey, as well as a wealth of additional sources. 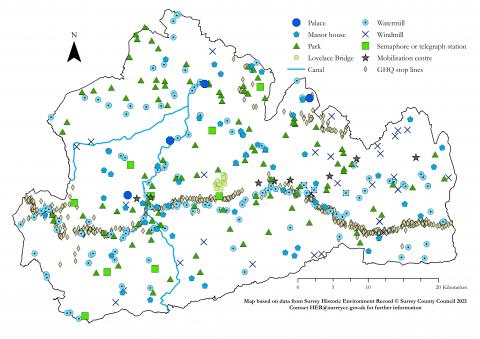 A downloadable A3 size leaflet on Post-Medieval Surrey has been put together by the Society in the hopes of providing a helpful overview and timeline of the period, illustrated with select images from excavations, research and fieldwork.

For some further learning sources on Post-Medieval Surrey: