A survey of 51 churches and their medieval graffiti was undertaken by Abigail Coskun as part of her Durham University undergraduate dissertation, entitled 'Life and Death, Demons and Devotion: the Medieval Graffiti of Surrey’s Parish Churches'.

In recent years, the early inscriptions and carved artworks in churches have become the subject of large-scale surveys, not least for the fascinating pictures which are represented - heraldic designs, word puzzles, ships, architectural plans, figural scenes and cartoons, etc - and the insight they shed on the artists themselves. This work contains an excellent overview of many of these themes, as represented in case studies from Surrey. Individual records will be made available in due course.

Medieval church graffiti has recently emerged as a growing area of study within archaeology, as new techniques have brought to light thousands of inscriptions in churches around the country. This study aimed to record the medieval graffiti found in parish churches in Surrey and use the results to explore the way that aspects of medieval society and belief manifested themselves in this medium. 51 churches were surveyed during this research and their graffiti was photographed and recorded. This data was analysed and compared to the results of other surveys nationwide. Knowledge, ideas and techniques from disciplines such as manuscript art, palaeography, architectural history and religion were drawn upon to supplement analyses. Through this, the study concluded that the graffiti in Surrey’s churches has a great deal to add to understandings of the way that its medieval communities lived, died and interacted with their church and faith. Insights were provided into areas such as education, gender and life course, as well as about belief in purgatory, the impact of ritual and liminality and the way that Christianity interacted with traditional folk beliefs. Several individual graffiti inscriptions that were found were also judged to be of high significance nationally. 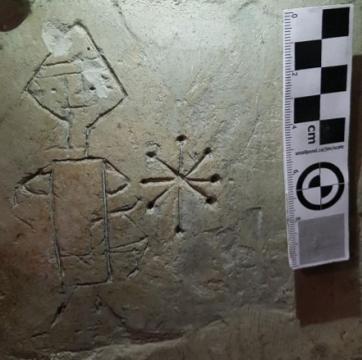