Many members of the Society will have participated in or visited the excavations at Woking Palace which took place between 2009 and 2015 and some will have visited the new permanent exhibition about the Palace and its surrounding deer-park at The Lightbox in Woking. The final stage of the HLF project has the production of a full report on these investigations at the Palace, which will provide much of interest to both archaeologists and those interested in the history of the medieval manor and its transformation into a Tudor palace. This will be followed later in 2018 by a shorter booklet aimed at the general public.

For anyone now wishing to purchase a copy the details are as follows: 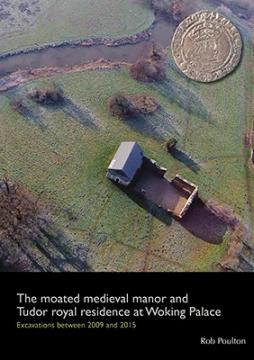 Community excavations have revealed the development of Woking Palace. King Richard I granted the manor to Alan Basset and soon after he created a moated residence. By around 1300 the complex included stone buildings that thereafter always formed the core of the privy lodgings, a great hall, household and privy kitchens, and lodgings for courtiers.

The aristocratic lifestyle is shown by stonework in Sussex marble, patterned floor tiles, grisaille window glass, and swan and deer consumption. In particular fallow deer must have come from the nearby hunting park, established in tandem with the manorial site.

Woking was always held by great families with close connections to the crown. In 1485 Lady Margaret Beaufort, mother of Henry VII, embarked on major construction work, all in the fashionable medium of brick. When Henry VII claimed the manor in 1503 the amenities were already suitable for a royal household, with suites of king’s and queen’s lodgings and plentiful other accommodation. His principal new work was the replacement of the great hall.

The later Tudors built little new, although documents show much was spent on modernisation and improvement. In 1620 the manor was granted to Sir Edward Zouch and soon after he carried out a thorough demolition.