Surrey Roads from Turnpike to Motorway

Roads provide the most widespread form of communication; they are one of the oldest and most prominent features of the landscape. In spite of this, detailed knowledge of some of the earliest roads in Britain is hard to trace.

Evidence of Roman roads is often found by remains on the ground, but the highways of medieval and Tudor England have left few visible signs. For thousands of years Surrey was merely a place that travellers passed through on their way from London to important towns such as Winchester or Portsmouth. Consequently most of the roads were primitive, badly aligned and surfaced and ran largely north to south. The east to west routes were very poor and few in number. The stream of Turnpike Acts passed in the seventeenth century became a flood in the eighteenth.

Ogilby's Road Book had many editions and county maps made a feature of post roads and crossroads. Matters began to improve significantly during the nineteenth century and even more rapidly during the twentieth. Some road improvements were planned and built accordingly, other proposals came to nothing. 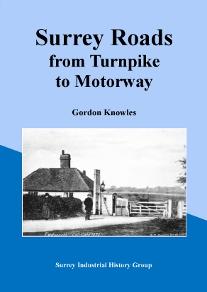