Statement from our President about Castle Arch

This note is intended to provide information to update members and visitors to our site about the situation as regards the Society and recent actions by Guildford Borough Council. It includes some references to correspondence in the on-line ‘Guildford Dragon’ and a recent press release from the Borough Council (attached as an appendix for information). The Dragon can be accessed on-line by those interested but the references should be self-explanatory.
The Borough Council’s press release concerning the future of Guildford Museum at last provides some welcome clarity about the Council’s intentions. The Society has been hoping to achieve this since we unexpectedly received notice to quit Castle Arch in mid-July. For that reason, until now, we have not chosen to make any statements with the exception of responses to questions from the press directed, at our request, to Emma Corke, my predecessor as President. 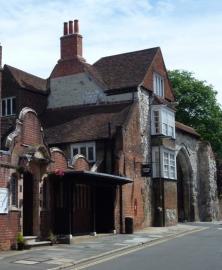 Councillor Davis (recently appointed Lead Councillor for Economic Development, responsible for Heritage and Tourism) has been somewhat critical of the Society in various comments to the Guildford Dragon and the Surrey Advertiser but seems to be proceeding from a lack of understanding of all the facts. The Borough Council now requires the Society to leave Castle Arch (left) by January 2016 after over a century of very close collaboration with the Museum. This was most recently formalised in 1953, in an agreement that was brought to an end by the Council in 2008. Initially the Council required the Society to leave but there was then a change of mind and a new rent was suggested at a level designed to acknowledge the Society’s contribution in kind. The Society was willing to pay a commercial rent for our office and library and was routinely providing for such an eventuality until new accounting rules came into force that prevented this because of a lack of any action by the Borough Council.
It was not the Society that dragged its feet but the Borough Council, which has nevertheless continued to act as though it was expected that the Society would remain at Castle Arch. Thus the Council’s own website currently states that ‘The headquarters of Surrey Archaeological Society is still housed in the Museum where there is an extensive archaeological library and a collection of research material devoted to Surrey’. As recently as 2013 Guildford Borough Council Heritage Services Collections Development Policy (approved by the Borough Council on 5 December 2013) noted that ‘the Museum and Society collections were dealt with as one, as is the case today’.
The Society welcomes the new commitment from the Borough Council that ‘We hope that the SAS exhibits will remain on loan in the Museum after their [the Society’s] office relocation’. It is good to see that the original intention to clear the exhibition spaces of the Society’s material, including much directly relevant to Guildford, has now been abandoned. All three of the differing versions of the notice to quit, served in quick succession, were quite specific on this point, although Councillor Davis overlooked this in an earlier comment (and also forgot our important library in a more recent comment). We have now been told, however, that we will be required to pay for storage of the Society’s collections, so it appears that the Society will have to pay for the privilege of storing the collections that have been rescued by its actions and which provide the backbone of the displays. With the need to find a new office and library space the Society therefore faces the prospect of a major drain on our resources.
The Borough Council’s approach seems to spring from a misunderstanding of the Society’s financial position and its activities. The Society is a registered charity whose activities are answerable to the Charity Commission. The trustees have wide-ranging legal and financial responsibilities as well as a number of legal constraints and the current relatively healthy financial state of the Society reflects the continuing diligence and effectiveness of the Society’s trustees. A closer look at the accounts would have shown that the Society relies on its capital to provide income in order to foster archaeological and local history research. Put very simply this includes a major research library (used also by the Museum staff and many researchers not members of the Society), publication of the results of archaeological and historical work relevant to Surrey, grant aiding research work or the purchase of important objects or research material that would otherwise be lost to the public, and supporting the cost of modern excavations where scientific techniques are increasingly important. I might note in passing that the use of such techniques has recently led to the discovery of a site close to Guildford that will rewrite our understanding of the history of the town. It is thanks to the Society that major sites have been rescued from destruction over the course of more than a century and we still step in where other means are not available. We seek where possible to involve the public and allow schoolchildren to experience the thrill of archaeological excavation in progress. 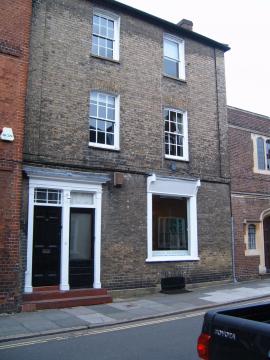