This year the Roman Studies Group celebrates its 20th anniversary and we are pleased to celebrate this event with a talk by Joanna Bird on the Colchester Vase. This will take place after a short AGM.

The Colchester Vase is a decorated ceramic pot  discovered in a Roman grave at West Lodge in Colchester in 1948 and it can be seen at Colchester Castle Museum. It is thought to have been made in or around Colchester about 175AD and depicts four gladiators, named as Secundus, Mario, Memnon and Valentinus. It is one of the finest examples of ceramic art known from Roman Britian.

Joanna Bird is an archaeological ceramics expert specialising in Samian, and has written many papers and edited, or contributed to, many books on the subject. She has been involved in the re-evaluation of this barbotine decorated pot and has been exploring how the pot was constructed.  Joanna is well known to the Roman Studies Group and we are pleased to welcome her back.

This meeting will take place by Zoom and RSG members will receive the link a week in advance. If you are a member of Surrey Archaeological Society but not yet a member of RSG you can join for £5, giving you free access to the Winter Series of talks as well as visits and seminars. See RSG web page for details. 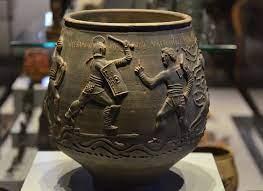