The Premier Cooler and Engineering Co., Ltd. manufactured wooden cooling towers and miscellaneous steel industrial equipment at its Station Works, Shalford, near Guildford, Surrey between 1920 and 1966. Premier Cooler was one of Shalford’s largest employers. Their products were installed in many power plants, chemical works, collieries and steel works in Britain and around the world.
This booklet describes the origins and history of Premier Cooler. The author discovered unexpectedly that this British company had its origins in Maschinenbau Aktiengesellschaft Balcke of Bochum, Germany. The story of Premier Cooler provides an interesting case study of the impact of the declaration of war in August 1914 on one of the many German companies who had made direct investments in Britain in the late nineteenth and early twentieth centuries.
Premier Cooler was a successful company over many years. The booklet provides some sales data and compares Premier Cooler’s products to those of their competitors.
This relatively small company eventually succumbed to the pressure of global competition. Premier Cooler was sold in 1966 and a new factory was built on the Station Works site for the manufacture of pharmaceuticals. 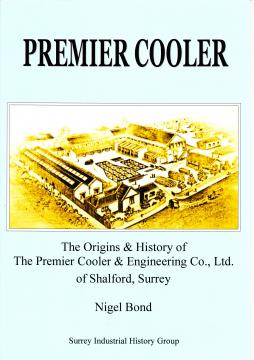