The Lithics section of the Prehistoric Group recently reassessed the Grinling-Collins collection of lithic tools held in .

Little is known about Charles Grinling (1860-1947) (below) who moved to ‘Merriedown’, Peaslake at the end of WWI, except that he is said to have excavated at Holmbury Hill (pers. Comm.: K Winser), although there does not appear to be any record of this activity. In due course he met and encouraged Patrick Collins in his interest in lithics. Collins (c1921-1991) lived at Weyside, Wonham Way,  Peaslake, and joined the Surrey Archaeological Society in 1935, eventually becoming a well known and respected archaeologist in . He moved from  to join the newly established Archaeological Survey of Northern Ireland in 1950, and lectured at Queen’s University Belfast. Collins was primarily responsible for prehistoric sites and carried out a number of pioneering excavations on megaliths. He was interested in ancient technology and an international authority on the production methods of flint tools. His memory was honoured in 2003 when the public archive facility, Waterman House, in  was opened with the naming of the research room as ‘The Pat Collins Reading Room’. 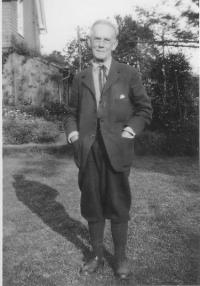 The mutual archaeological interests of Grinling and Collins enabled them to amass a large assemblage of prehistoric material from Peaslake and the surrounding area at a time when such interests were growing. They were a formidable team, taking advantage of any land disturbance caused by farming, building, gardening or forestry clearance, and their collection includes finds by neighbours and friends brought to them for analysis. Their collection was donated to  in 1949 and includes fine examples of tools from all periods, but Collins continued to collect in Surrey and many microliths from Sandy Meadow have since been donated to  through Roger Jacobi..

More recent collections from the same general area by Dr Watson (another Peaslake resident) and  add weight to the evidence of considerable activity through the Mesolithic and, particularly, the Neolithic and Bronze Age periods.

In the 1980s,  and Dave Field met Pat Collins who was visiting his sister in Peaslake, and visited a couple of mutual sites. Pat Collins gave  some of his maps marking some of his find locations. These maps have now been deposited at Castle Arch and were invaluable when recording the Grinling-Collins collection on the spreadsheet being created by the Lithics section of the Prehistoric Group. This collection contains many classic items including a number of microliths from Sandy Meadow, Wotton. More recent collections from this well known site continue to demonstrate its importance. A more detailed appraisal of Sandy Meadow is needed and we hope that our work will contribute to this.

The Grinling-Collins collection is now recorded on a spreadsheet available from  or the contacts below. None of this work would be possible without the support of Jen Newell, Judie English, Chris Taylor, Roger Ellaby, Ken Waters and Robin Tanner.