First of all, a big thank you to everyone who helped to make the latest season at Abinger such a success. It may seem odd to say that in view of our failure to finish the trench, but this was a result of finding that there was more surviving archaeology than anticipated. Much of this must be down to your hard work in tackling the difficulties of finding archaeological features in sand. As a result we have a much better understanding of the site and how to approach it in future.

We can now say with certainty that there is a pre-Roman site on the hilltop but also that activity continued in some form into the Roman period. Given the proximity of the villa site there can be little doubt that we are looking at continuity of occupation from the Late Iron Age, and at some point yet to be determined a shift of the central focus from the hilltop to the lower site. Expert analysis of the pottery will be required to give us the likely dates, and may indicate activity on the hilltop earlier than Late Iron Age. We certainly have Mesolithic and probably Neolithic worked flints, so the ground stone axe may indicate occupation at that date rather than an item reused in the later periods. If so, it is worth noting that it would have been a prestige item.

Detailed analysis of the finds may make it possible to date some of the features so that we can identify phases of activity. At present few features are intercutting and where they do it is not always possible to be sure what cuts what. Further work at the northern end of the site is likely to provide more evidence. This all means that what follows can only be a tentative assessment of what we are finding. There are more features to explore and any dating can only be approximate until the finds receive expert attention. Even then there may be difficulties, as identification and dating of Iron Age pottery is very much a matter of ongoing research.

At the top of the trench (nearest the camera in the photograph) we have a curving ditch which Emma was able to show late on was deeper than we had realised (this may well be true for several features). It is probably Iron Age, and the magnetometer survey suggests that it curves round the brow of the hilltop in some way and encloses the main area of activity seen on the survey. It may be related to the ditch found coming back across the earlier Trench 11 at the end of 2012 not far below where we were working this year. The deep feature in the cut at the lowest part of our trench alongside the former Trench 6 (ie on the eastern side of our trench) may also be relevant. This produced a couple of prehistoric sherds from near the bottom of the fill and matches the ditch previously found in having a near vertical upper face and a dark fill. This feature was cut across much later by the broad ditch that runs across the bottom of our trench and was sectioned on the western side (with a small extension to the south). Rather than a ditch this may be a medieval or later lynchet on the line of a boundary that once continued the line of the hedge behind (south of) the site tents. 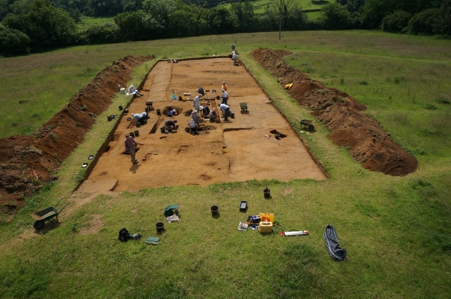 We thus have evidence suggestive of a roughly circular enclosure that might be dated to the Late Iron Age or earlier. Within the enclosure as seen in our trench there is evidence for considerable activity, especially in the deep pits at the top. It should be noted however that some of those pits were barely visible at the surface and there are certainly areas towards the bottom (south) of our trench that are not yet showing the natural surface: towards the eastern side of the trench there is a marked circle of burnt clay or tile fragments with a larger feature around it, and on the western side it is possible to see an amorphous area of soil that we have sampled to show at least two deeper cuts. Thus we may find in due course that there was activity here comparable to that at the top of the trench.

Further up we have the enigmatic spread of ironstone that seems to have a straight lower edge and another feature with burnt clay or tile fragments. Although there are areas of ironstone that are part of the natural formation, this spread seems to be artificial and its straight edge is therefore noteworthy. It may be part of a structure. Beyond it to the north is an area of small discrete features usually with pieces of ironstone and pottery fragments. The general consensus was that these might be Late Iron Age cremation burials and they have been left for further work when we have sufficient time to give them all the attention they deserve. On the other side of the former trench 6 in this general area one or two gullies probably of Roman date were found. The relationship between one of these gullies and the postulated cremation area will require careful examination.

The current programme of work is dedicated to gaining a better understanding of the origins and setting of the Roman villa. As well as the work on the hilltop, a trench in the field to the north located a ditch known from magnetometer survey to be part of the Roman period field system. It was a substantial ditch, cut through hard ironstone layers, and possibly marks the boundary of the area of fields around the villa (the estate seems likely to have included land used for other activities beyond the fields). A second trench in the valley bottom found deep colluvium and could not be taken deep enough to locate a postulated trackway. Further work will be needed here and on some of the other widespread anomalies known from surveys.