Damnable Inventions: Chilworth Gunpowder and Paper Mills of the Tillingbourne

'Damnable inventions' were the words used by William Cobbett, when he visited the Tillingbourne valley in Surrey in 1822, to describe: the industries of Chilworth and Albury - the manufacture of gunpowder and of paper for printing banknotes.

The Chilworth gunpowder mills were established in 1626- and worked almost continuously until 192. At times, in the late seventeenth. century and again- in their final years, the works stretched along the Tillingbourne from Chilworth to Postford. For much of the powder mills' 300-year history, from 1704 to 1875, paper 'mills operated alongside.

The stories of the two industries are brought together in this book. It is a new, expanded edition of two earlier books: Chilworth Gunpowder by Glenys Crocker; published by the Surrey Industrial History group in 1984, and The Paper Mills of the Tillingbourne by Alan Cracker, privately published in a limited edition by the Tabard Press in 1988.

It is a book of local history against a background of events in the wider world: the East India Company, the Civil War, the Dutch Wars, Huguenot refugees, the South Sea Bubble, the slave trade, the Industrial Revolution, the French Revolution, the Napoleonic Wars and the First World War.

The story is illuminated (and sometimes confused) by eminent writers of the past - John Aubrey, John Evelyn and Cobbett - and revealed by the observations of more ordinary men and women and a wealth of archive material in record offices around the country. 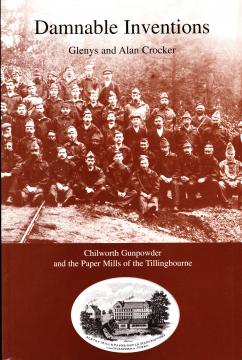