In 2012 David Williams reported in Bulletin 431 on a Late Iron Age and Early Roman site at Charlwood where a group of coins and other objects had been found by members of the Weald and Downland metal detector club. A magnetometry survey in May 2011 confirmed the possibility of buried archaeological features. The coins and associated objects were declared Treasure in 2012 and subsequently acquired by the Society. In November 2013 further magnetometry took place, after which plans were made to evaluate the results of these surveys.

In late October 2014, members of the Prehistoric Group opened two trenches. Trench 1 targeted a large magnetic anomaly which proved to be devoid of features. The anomaly was probably due to a large iron file found in the centre of the ploughsoil. This trench did however determine that the depth of the ploughsoil was approximately 25cm.

Trench 2 was sited over what appeared to be a possible section of a ditch and did indeed expose a length of a narrow ditch some 40cm wide beneath the ploughsoil. It runs roughly east to west through the 6x3m trench and when sectioned proved to be about 30cm deep. It is likely that it has been truncated by the plough. A 4m length of the uncovered ditch was filled with a burnt deposit containing large quantities of heavily burnt bone which has been provisionally assessed as being mostly of animals. There was also a considerable amount of pot sherds in this deposit which again has been provisionally assessed as being of Late Iron Age and early Roman in date. Expert reports are in hand. 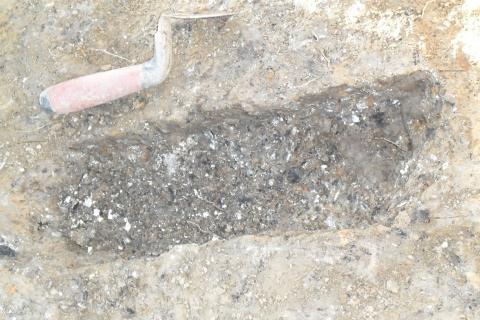 Further work at this site is now being planned starting with more magnetometry to try to determine the extent of the archaeological features.

My thanks are due to Nicola Bamforth, David Calow, Judie English, John Jennings, David Lea, Jenny Newell, Martin Rose, Mairi Sargent, Ken Waters, David Williams and Keith Winser for their assistance and advice on this project.