In March 2018, a trench was opened to investigate a pit and ditch formation found in 2017 to the east of the known site. However, due to the weather and soil conditions it was not possible to undertake much work safely for either the archaeology or the volunteers (who were remarkably determined in spite of the challenging conditions). We now hope to return to deal with unfinished business in the autumn. 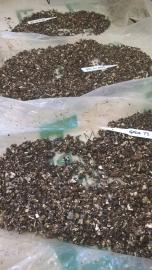 Previously in late October 2014 members of the Prehistoric Group opened evaluation trenches at a site at Charlwood. This was to investigate the possibility of buried archaeological features in a field from which a group of coins and miniature objects of Late Iron Age and Early Roman date had been found. One (6x3m) trench was sited over what magnetometry suggested could be a ditch and exposed an east-west length largely filled with a burnt deposit containing large quantities of heavily burnt animal bone and pottery sherds. This deposit was sampled and wet sieved before being sent for analysis.

A report about the sampled cremated animal bone found in 2014 has now been received from Clare Rainsford. The following is an extract from the report and it should be noted that it is based on samples taken from the ditch in which it was found and is by no means the whole of the bone assemblage deposited therein.

In summary, the calcined bone assemblage from Charlwood is characterised by consistent heavy burning, dominance of sheep/goat remains and some inclusion of pig and chicken, and almost no burnt remains of large mammals. The remains of sheep/goat and pig show evidence of dismemberment of the carcass, indicating that the animals were butchered prior to burning, but all parts of the skeleton are represented. The assemblage is moderately large, containing a minimum of eight sheep, three chickens and two pigs.

While excavation and interpretation of the site are still ongoing, votive deposits of coins and miniature objects from the late Iron Age and early Roman period suggest that the site may have had a ritual function. Burnt offerings have been found from other Roman shrine sites, although infrequently in Britain (e.g. Wanborough; Verulamium (King 2005)). However, the assemblage from Charlwood does bear similarities to those from many Roman shrine sites, which are frequently tightly focused to a small range of species, most often sheep/goat, pig and chicken (King 2005). At some of these sites, there is a distinct slaughtering age for ovicaprids represented (e.g. Uley (King 2005)), which does not appear to be the case within the Charlwood assemblage, where a wider age range within sheep/goat remains seems to be represented.