A third season of excavation in Charlwood took place in March 2017. In an attempt to define the area of research interest six trenches were opened across the field from west to east. (See illustration of site layout). Five of these trenches revealed some archaeological evidence, confirming the existence of parallel ditches which can be followed for c.40m east to west on what is essentially the brow of the hill, and appear to define a southern boundary.

Importantly there is now a north-south ditch at the west end of the parallel ditches, though no evidence for their junction was determined. This ditch in Trench 6 also appears to be a boundary since the evaluation Trench 7 further west was void of any archaeological features. It was noted that the north-south ditch appeared to have been cut through an old stream bed and was later damaged by a revival of this stream. Finds were few and were mostly discrete deposits of partial but broken pots at intervals throughout the opened portion of the ditch. These include a Samian jar (Dechelette 67, Flavian: pers.comm J Bird), and all appear to be early Roman in date. 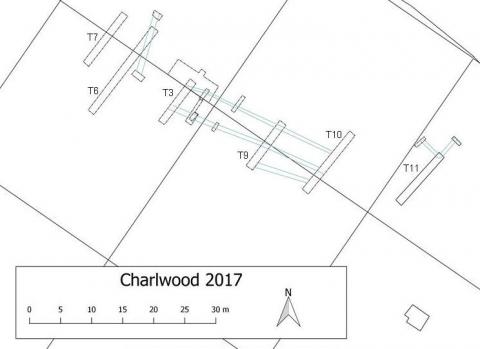 There was also a ‘plank’ at the bottom of this ditch beneath a portion of a redware pot. This ‘wooden’ object was lifted and sent to Dr Mike Allen who kindly cleaned it before sampling for C14 dating. However, he reports that although once undoubtedly wood it was now “an organic stain” and the “lack of preservation of wood suggests that permanent waterlogged conditions did not prevail in the ditch”. Unfortunately this means that C14 dates could not be obtained. 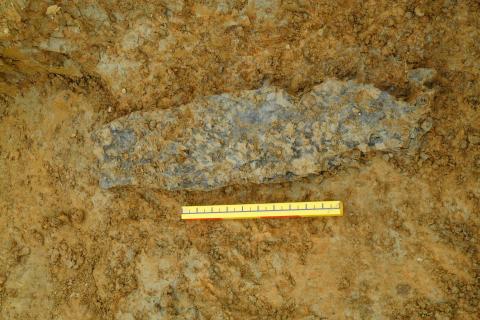 Moving east, a trench was opened over part of the 2016 Trench 3 to check the relationship of the ditch then found with the ‘burnt bone’ ditch of 2014. (nb: Bulletins 449 & 457). It can now be shown that they are parallel ditches running east-west. A further three evaluation trenches towards the east also produced interesting results. Trench 9 revealed a potential third ditch, south of the previously known ditches. It is hoped to investigate whether any more such ditches run below this in due course. 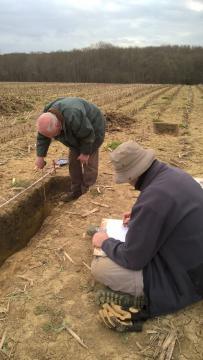 In Trench 10 the upper east-west ditch appeared to end at a probably pit at the north end of the trench. Only a portion of this pit was cleaned with the sole find of a large redware rim at the bottom. This will be investigated further in 2018.

Trench 11 was also of great interest at the northern end where a complex ditch composition was revealed in two trench extensions necessitated by the revelation of a curving ditch in the main trench. This area will also be further investigated in 2018, subject to permission. 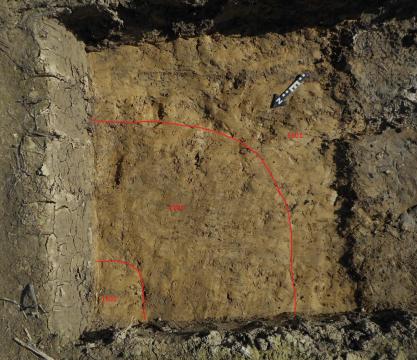 It can now be said that a shape is beginning to form and that the evidence so far suggests a ceremonial centre rather than settlement. Post-excavation work on the cremated animal bone and the pottery continues and should add to the eventual interpretation of the feature so far revealed.

Thanks are due to the landowner who backfilled the site, and to the many volunteers who had to deal with a difficult soil. It is only due to their efforts that such interesting results have been achieved. It is anticipated that an open area to look at the features partially revealed by Trenches 10 and 11 will be excavated in March 2018.