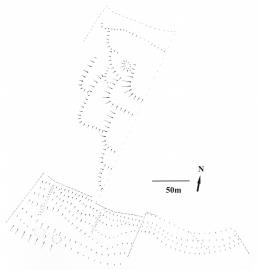 Transcription of aerial photographs by Simon Crutchley (English Heritage) led Mike Russell (2002) to suggest the presence of a prehistoric field system at land on Willey Farm, Chaldon, and that it might be associated with the nearby hillfort known as either War Coppice or Cardinal’s Cap.  A visit to the area showed that some of the field boundaries appeared as above ground earthworks and it was decided that an analytical survey would be undertaken by members of the Prehistoric Group. The project is far from finished and the aim of this note is to report progress to date.
Several of the fields have been extensively ploughed and the remains are slight but one field, presently under the management of Surrey Wildlife Trust, seems to have been used for grazing and some of the lynchets still stand over 1m high – a most unusual finding in Surrey. 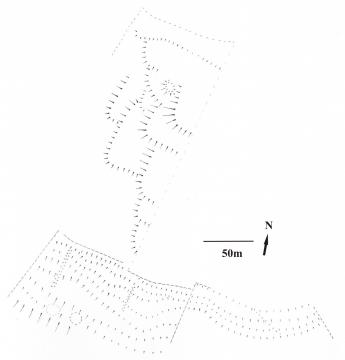 The results from that field are shown and reveal a series of enclosures ‘looped’ onto each other and with ‘playing card’ corners.  There is no evidence for the date of construction of this field system but the morphology is similar to examples which, using phasing or relative chronology, can be tentatively placed within a Late Bronze Age / Early Iron Age context.  At Stockbridge Down (Hants) the sides of a series of ‘looped’ fields are overlain by a ‘Wessex’ Linear Ditch and both features are cut by the outer ditch of Woolbury Rings (Cunliffe & Poole 2000).  This type of boundary complex is usually dated to the Late Bronze Age (Bradley et al 1994) and the hillfort is somewhat insecurely dated to the Early or Middle Iron Age (Cunliffe & Poole 2000).  A number of similar field systems occur on the South Downs including examples on Thundersbarrow Hill, on Plumpton Plain and on Tenantry Ground, Willingdon and again, a Late Bronze Age genesis is likely (English forthcoming).
These fields are clearly formed sequentially but whether over a period of days or decades is uncertain; in all the cases studied the series starts upslope and individual fields were added downhill.  The fields may have originally had squared corners, but ploughing round, rather than into, those corners resulted in soil spilling over each side and masking the square shape.  Whether intentional or not, the successive field boundaries would ‘catch’ erosion products thus retaining some relatively fertile and water retaining soil above the porous chalk bedrock.
The contour lynchets seen to the south, on s steeper portion of the scarp slope of the downs, may well be high medieval in date, but one of a similar series in the Mole Gap was overlain by a Late Bronze Age hoard (Williams 2008) and an earlier genesis is possible.
The paucity of prehistoric field systems on the North, relative to the South Downs mirrors that of barrows (Field 1998), remains unexplained. On the South Downs it is difficult to find unenclosed land other than on the scarp, whilst on the North Downs in Surrey the few examples include Fetcham Mickleham and Farthing Downs. Of these the fragment at Chaldon remains the best preserved and it is hoped that inclusion within the nature reserve at Quarry Hangers will afford it some protection.
(The  illustration of the field system so far surveyed is attached, please click on the link below for a rather clearer view)
Those undertaking the survey include Rose Hooker, Pauline Hulse, John Jennings, Jen Newell, Ken Waters and we are grateful to Nickie Blatch  of Willey Farm and Geoff Hewlet of the Surrey Wildlife Trust for permission to work on land under their control.
Judie English (for the Prehistoric Group)
Bradley, R, Entwistle, R & Raymond, F 1994 Prehistoric land divisions on Salisbury Plain: the work of the Wessex Linear Ditches Project, London: English Heritage
Cunliffe, B & Poole, C 2000 The Danebury Environs Programme: the prehistory of a Wessex landscape, Vol 2, pt 1: Woolbury and Stockbridge Down, Stockbridge, Hants 1989, Oxford: English Heritage and Oxford University Committee for Archaeology, Monogr 49
English, J forthcoming, Pattern and Progress: field systems of the second and early first millennia BC in southern Britain, Oxford: BAR Brit Ser 587
Field, D 1998 Round barrows and the harmonious landscape: placing Early Bronze Age burial monuments in south-east England, Oxford J Archaeol 17, 309-326
Russell, M 2002 Prehistory, in Fookes, G (ed) Chaldon, Village Histories 7, The Bourne Society
Williams, D 2008 A Late Bronze Age hoard from Norbury Park, Mickleham, SyAC 94, 293-301