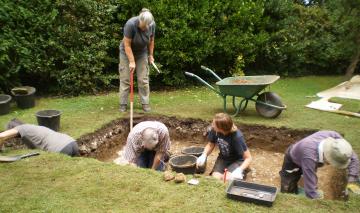 A fourth season of excavation at Bookham Courte, a medieval manor house near the centre of Great Bookham. Of the four new trenches, one was an extension of trench 7 in 2016. All the trenches contained medieval pottery suggesting the site went back to the 11th century. The remains of flint and mortar walls were found, but the archaeology showed that there had been various buildings or structures in the area over a long period.