A Guide to the Industrial History of the Borough of Waverley

The Borough of Waverley in south-west Surrey was formed under the re-organisation of local government in 1974 and named after Waverley Abbey, the first Cistercian house in England which was founded in 1128. It was created from the Borough of Godalming, the Urban Districts of Farnham and Haslemere, and Hambledon Rural District and its four main centres of population are the towns of Godalming. Farnham and Haslemere and the village of Cranleigh. The borough is crossed by the north and south branches of the River Wey, which rise near Alton in Hampshire and near Haslemere respectively and join at Tilford, some 5km downstream from Farnham.

The industries of the Waverley area include those which had their heyday in the Middle Ages and Tudor times - woollen textiles, Wealden iron and Wealden glass. While these declined, other industries developed. Farnham became a major wheat market and a centre of hop-growing, with the associated industries of malting and brewing. Godalming also had several breweries, continued to manufacture textiles, particularly hosiery and knitwear, and developed a considerable leather industry. Paper mills were established at several long-established watermill sites on the Wey from the 17th century onwards. Local blacksmiths' and wheelwrights' shops adapted to the era of motor transport and specialist engineering works developed in the 20th century. Sand and gravel extraction, the quarrying of building stone and the digging of clay for bricks. tiles and pottery, have been significant over a long period and industries based on the exploitation of woodland have continued up to recent times.

Road and rail routes from London to Portsmouth cross Waverley and there are two waterways: the Godalming Navigation (1763) and the partially restored Wey & Arun Canal (1816). In the sphere of public utilities, Godalming has the distinction of being the first town in Britain to have a public electricity supply. 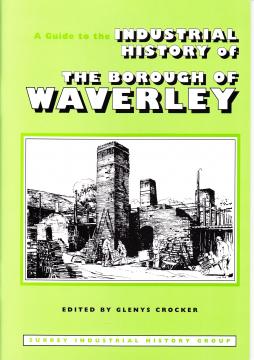