A Guide to the Industrial History of Surrey Heath Borough

The name Surrey Heath has no historical connections being merely a convenient description of the area covered by the Borough created in 1974 by the union of Frimley and Camberley Urban District Council and Bagshot Rural District Council. In 1990 the part of Sunningdale in Surrey Heath was transferred, together with another part in the Borough of Runnymede, to the Royal Borough of Windsor and Maidenhead in Berkshire, to be united with the rest of Sunningdale. This guide will cover the whole of the original borough embracing the districts of Bagshot, Bisley, Camberley, Chobham, Deepcut, Frimley, Lightwater, Mytchett, Windlesham and part of Sunningdale. The total area is 9600 ha and the population is 80 000. As can be seen on the map the Borough is a rough rectangle with the Surrey Boroughs of Guildford, Runnymede and Woking and the counties of Berkshire and Hampshire on its borders. The western boundary is marked by the River Blackwater and part of the north western by the Wish Stream but the other boundaries have no special features. Until the 19th century the whole district was very poor and sparsely inhabited with a few fertile parts including the small area of the River Blackwater valley, the rest being based on the notoriously sterile Bagshot Sands. The only importance the district had was due to the old Great Western Road and its branch to Portsmouth. Even in 1800 Camberley, the largest town in the borough, did not exist as the area it now occupies was the almost uninhabited Frimley Heath. The first inkling of future development came in 1792 when George III reviewed the troops preparing for the Napoleonic Wars at one of Britain's first camps for combined training of soldiers. This was at Wickham Bushes on Bagshot Heath and was followed in the 19th century by the opening of the military colleges at what was to become the Military University Town of Camberley. The end of the 19th century saw the setting up of the Bisley Rifle Ranges on the border with Guildford borough. The First World War brought so many other military activities that they came to dominate the borough by occupying at one time or another over 17% of its land. The Second World War saw activities ranging from tank testing on Chobham Common to officer training at Camberley.

Some of the open heathland was worked for sand, gravel, clay and Sarsen stones while other parts yielded heather for broom making and gorse and peat for fuel, some of which was used for brick making. However the soil, rather surprisingly, did prove suitable for the propagation of ornamental shrubs as in the late 18th century many plant nurseries were developed in the area. One of the most important is Waterer's, now Notcutts, on Jenkin's Hill west of Bagshot which is still in business after 200 years. Farming had been the main occupation until the 1920s while industry on any scale only came to the borough after the Second World War when it developed into a major employer. There is still much heathland left in the borough, Chobham Common and Bagshot Heath being two main examples. 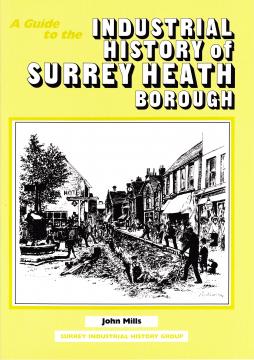