A Guide to the Industrial History of Mole Valley District

Mole Valley District was formed at the reorganisation of local government in 1974, It consists of the old Leatherhead and Dorking Urban Districts together with much of the Dorking and Horley Rural District. It covers about 100 square miles stretching from Chessngton (in the London Borough of Kingston-upon-Thames) in the north to Gatwick (in West Sussex) in the south.

Extractive industries were an important part of the industrial past, the extracted materials varying as the geology changes across the District. Chalk quarrying and brickmaking were particularly important and were carried out at a number of sites in the area.

Railways and roads both use the north-south Mole Gap through the North Downs. The A24 and A25 roads cross at Dorking as do the London-Horsham and the Reading-Tonbridge railway lines.

In general the book gives brief descriptions of the main industrial activities in the District referring, where possible, to sites ard buildings which are still in situ. As well as the larger industries, other sites of particular interest are described; especially items which may not be included in other types of local history guide books. This book does not cover all industrial activities in the District, but it includes the information available at the time of its preparation. The Group would welcome details of any errors or omissions in the Guide so that our records, and those of others to whom we suply information, can be as accurate and comprehensive as possible. 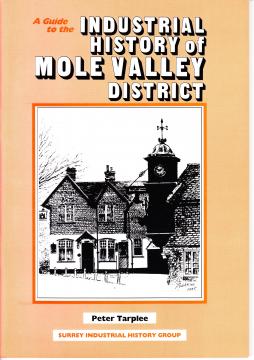