An analytical survey of Hascombe Hillfort (TQ 005 386) was carried out by members of the Surrey Archaeological Society over the winter of 2008-09, and a magnetometry survey of part of the interior took place in the spring of 2009. A full report of these activities (of which this is a summary) has been lodged in the Surrey Archaeological Society library. 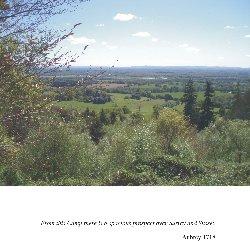 Hascombe hillfort is situated at the southern end of a spur which extends southwards from the main greensand ridge and bounds the western side of the Bramley Wey valley. This flat-topped ridge has extensive views to east and south, and to the north the ridge of the Hog’s Back, part of the North Downs, can be seen. The view west is blocked by high ground but the view eastwards includes Holmbury hillfort and Leith Hill, while that southwards encompasses both the ridge representing the watershed between the Arun and the Wey, and the South Downs.

The hillfort itself occupies the high point at the end of the ridge, but a small knoll lies to its south-east, separated from the high point by a shallow valley. A damp area supporting rushes suggests water may have been available within the interior of the hillfort. In general, the greensand ridge supports heathland vegetation, but cessation of use for grazing has allowed birch to become pervasive. On Hascombe Hill the slopes were clad with decorative planting of beech which later self-seeded, but the famous ‘Hascombe Beeches’ were largely felled by the gales of 1987 and 1991, damaging the ramparts of the hillfort.

Two excavations are known to have taken place at Hascombe hillfort, one by Winbolt in the 1930’s and the other by Thompson in the 1970’s. The earlier of these involved a number of trenches concentrated on the north-eastern leg of the earthworks. On the basis of the simplicity of the design of the entrance, Winbolt placed the construction of Hascombe hillfort to the period of the earliest of the Celtic invasions in the 6th century BC. Winbolt also investigated the “terrace walk” and showed by excavation that the walk had been constructed by filling an original ditch with material from an original bank. In trench K, at the most sheltered quadrant of the enclosure, Winbolt found a square pit in the bottom of the ditch containing pottery, charcoal, sand and sandstone burnt at a high temperature and a small amount of iron slag – his best evidence for iron-working on this site. The use of the ditch for this procedure would have been necessitated by the exposed nature of the site and the location makes it unlikely that the iron-working dated to a later period. 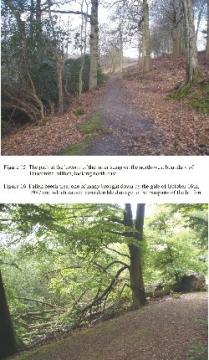 Thompson’s work concentrated on the entrance through the north-eastern earthworks and investigation of several geophysical anomalies within the interior. The presence of spindle whorls, loom weights and quern stones suggested some occupation of the hillfort but Thompson considered this to be of only a very intermittent and impermanent nature. On the dating of this hillfort Thompson placed the construction and occupation of the enclosure in the Late Iron Age.

Concerns that the dating assigned to the greensand hillforts did not correlate with that from other areas where hillforts have been recognised as having originated earlier in the Iron Age led to a reassessment of the pottery from Thompson’s excavations at Hascombe, Holmbury and Anstiebury (this report by M Seager Thomas will be published in the Surrey Archaeological Collections 95 in 2010). In summary, both Hascombe and Holmbury have produced small amounts of post-Deverel-Rimbury dated to the early 1st millennium BC and indicative of activity in the area though not construction of the enclosures. Middle Iron Age pottery dating to between c400BC and c100BC dominates the assemblages from Hascombe and Holmbury but forms a relatively minor component of that from Anstiebury. The presence of pottery from as far afield as Cornwall places Middle Iron Age Hascombe within a trade/exchange network recognised elsewhere in southern Britain.

The survey results show that the earthworks bound a roughly trapezoidal enclosure with the long axis lying north-east/south-west. The position of the earthworks is governed by the shape of the end of the ridge except where their north-eastern leg cuts perpendicularly across the length of the ridge. This north-eastern leg of the ramparts contains the entrance which is set off-centre towards the north-west, and has short out-turned banks on either side. To the south-east of the entrance the ramparts comprise a major bank and external ditch with a further slight bank set back towards the north-east. The area between the ditch and this outer bank is low-lying and bounded towards the south-east by a natural stratum of hard rock, effectively forming a bowl which is frequently water-filled. This band of hard rock has been cut into on its outer side to form a continuation of the track around the hillfort towards the north-east. No inner bank can now be seen along the south-eastern, south-western or north-western legs of the hillfort but a steep slope, probably representing an enhancement of the natural slope descends to a wide trackway. Consideration of the knoll to the south of the hillfort and other features noted during the survey can be found in the full report.

The results of the magnetometry survey were somewhat disappointing, although in line with those gathered with more primitive equipment in the 1970’s. The survey was limited to the area of the interior which had been cleared of vegetation. A number of slight, linear features, parallel to each other and to the main axis of the ridge, with one perpendicular, may represent field boundaries, possibly from prior to the construction of the hillfort. The overall impression is one of limited human activity within the interior of the hillfort.

The earliest evidence of human activity on Hascombe Hill located during this survey is the possible field system whose boundaries appear on the magnetometry survey underlying the interior of the hillfort. Recognition that Holmbury and Hascombe were contemporary in construction, that both showed some evidence of earlier activity in the form of post-Deverel-Rimbury tradition pottery, and that their main period of occupation was during the Middle Iron Age, and their possible Sussex links, contrasting with later dates for Anstiebury and Felday encourages a consideration of these hillforts in a wider context in the full report. Neither Holmbury nor Hascombe survived into the Late Iron Age, their role being taken by Anstiebury and the less prominent site of Felday. Both sites show some evidence of activity in the Middle Iron Age but they may well have come into use under very different political conditions – Anstiebury at least was to survive into the Romano-British period.

A consideration of the later history of Hascombe hillfort is also outlined in the full report. The inclusion of the hillfort on Hascombe Hill within the medieval park of Hascombe Manor may have been a deliberate act. In the 19th century an estate centred on Park Hatch, on the southern slopes of the hill, was developed, and a carriageway was constructed round the edge of the ridge by slighting the banks of the hillfort and using the material to infill the ditch as part of the use of the hill as part of a pleasure ground attached to the house of Park Hatch. Although this building has been demolished the past has not been forgotten and a further layer of recall was added in 1995 when the Modern Order of Druids erected a stone circle below the south-eastern slopes of Hascombe Hill.